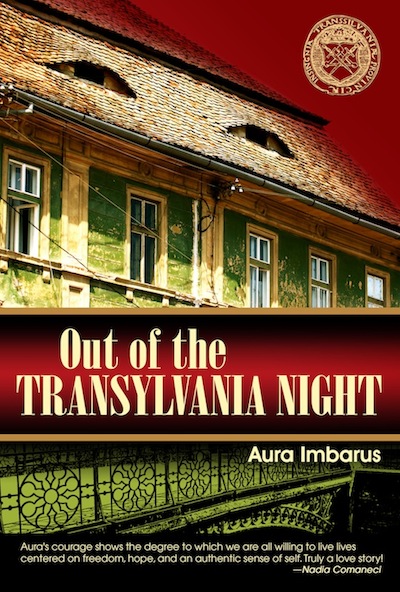 Out of the Transylvania Night: A Story of Tyranny, Freedom, Love and Identity by Aura Imbarus

“MY TRANSYLVANIA, homeland to Vlad, the Impaler, suffered a brutal heritage that was perhaps reborn in the Communist dictator, Nicolae Ceausescu,” says author Aura Imbarus. “My once serene and beautiful country became the land of the undead. As if Count Dracula had enslaved us, sucking our lifeblood away, Ceausescu turned Romanians into gray-clad zombies close to starvation who waited in long lines and never dared to call attention to themselves or show individuality in any way.” To escape torture and death, neighbors became informants, and the Securitate, the Romanian security force, made people quietly disappear during the night—including Aura’s family members—as if vampires had sneaked inside.
Yet Aura dared to be herself. As a standout, an individualist, an overachiever, a rebel, a fashionista, a scholar, and proud heiress to land and wealth that had been confiscated by the communists, Aura waged small wars every day.

Christmas shopping on December 21, 1989, Aura, her parents, and hundreds of shoppers drew sudden sniper fire as Romania descended into the violence of a revolution that challenged one of the most draconian regimes in the Soviet bloc. A grisly execution that rocked the world led to five harrowing days of bloody chaos as Aura and her family struggled to survive.

Sadly, the new regime remained corrupt and controlling. Though Aura fell in love and carved out a life envied by other Romanians, a fierce sense of independence made her yearn for something more. What did success mean if she couldn’t feel free?

Strangers to sacrifice and willing or hard work, the couple soon are living the good life. They buy a home, own BMWs and Porsches, and travel the world—only to find that a life of extravagance strain their marriage more severely than their years of struggle. Out of the bleakest nights come the hungriest of wolves, and the devouring sets in. The stock market crashed, and the couple lost all of their savings. The house fell into foreclosure, and a robbery targeted her precious family heirlooms. Aura’s beloved mother is diagnosed with terminal cancer. Under the strain, the couple divorce. Aura and Michael, her newlywed husband, fled a homeland still in chaos. With only $400, two pieces of luggage, and a powerful dream, they settled in Los Angeles in 1997.

But Aura soon realizes that even in the darkest days of her experiences in Transylvania, she had come through it; she had found her way to the light. And so their love story did live on. Their memories of living in a country at war and of the darkest days of their horrendous circumstances would reunite them, this time with a better understanding of themselves—and of the personal freedoms they would, or wouldn’t, give up in exchange for their love.OUT OF THE TRANSYLVANIA NIGHT explores tyranny and freedom, love, success, and the price paid for misaligned dreams in an epic tale of identity and the human spirit. It is a deftly woven narrative about finding greater meaning and fulfillment in a free world, and an exploration of how social issues affect the human spirit. An incredibly powerful memoir.

What sets this book apart from any others on this list is it’s a memoir, written by Aura Imbarus. Born in Transylvania, the birthplace of Vlad Dracul (Vlad the Impaler AKA Dracula), and under Ceausescu’s communist regime, Aura strikes me as the sweet, innocent and beautiful girl next door willing to pour out her heart to the world of what life was like living in what was then a communist country. Immediately I fell in love with her parents and grandmother, of which all three are the moral and unbending matriachs and patriach determined to hold on to what little their family had left to ensure that a future generation would have strong roots to hold onto.

Aura’s unbiased accounts of what took place on the day her country came apart and the days that follow are believable to the point that you become one with her. With relentless struggles and opposition at every turn, how does one find the strength to become more than what her country wants her to be? The courage in which she stands up to the world, as well as her parents, and proclaims that she will not be shackled to anyone’s expectations are commendable. Her journey to a new country to call her own, hardly any money in her pocket and no one to turn to (other than the one person she has travelled with) should trouble appear had me turning each page anxiously. I won’t give any spoilers simply because I want you to feel as I did from beginning to end. To put it plainly, this book will stay with me for many years to come. Because of this it MUST be included on this list. —Shelley Young – Writer

Author Aura Imbarus opens up about her escape from the Communist regime and to America, where she sought freedom from a war-torn land. InOut of the Transylvania Night, Imbarus tells her life story in such vivid detail and with an easily-flowing syntax that it does not feel like you’re reading someone’s biography, but a lifelong story of a friend who suffered through trials and tribulations to get to a better place. It is more than a personal journey, and gives hope to other immigrants who want to get away from their horrific home lives and emigrate to a new place that will be more accepting and safe.

Imbarus engulfs the reader into her life, so it feels as though you’re walking alongside her through her journey, and how she assimilates into a new and foreign American lifestyle. Through anecdotes and conversation with many other people, Imbarus makes the story easy to relate to for immigrants and natives all the same. SNITCHSEEKER REVIEWS

Aura’s courage shows the degree to which we are all willing to live lives centered on freedom, hope, and an authentic sense of self. Truly a love story! —Nadia Comaneci, Olympic Champion and Co-Founder of the Nadia Comaneci Children’s Clinic in Bucharest

Unforgettable…it gives the pioneer spirit and courage to be outraged in the face of injustice, and the heart bravado in making change in the world.—Adrian Maher, Documentary Filmmaker, Discovery Channel

A compelling story of a fiercely independent young woman growing up at the height of world wide Communist power and then rapid fall of the Iron Curtain. If you grew up hearing names like Tito, Mao and Ceausescu but really didn’t understand their significance: READ THIS BOOK!—Mark Skidmore, Paramount Pictures

Aura’s Transylvania presents an emotional journey through both free and closed societies, revealing how freedom is found in the self, not the destination—Ilie T. Ardelean, Founding Chairman and President of Romanian-American Professional Network- RAPN

A remarkable account erasing a past, but not an identity. Thought-provoking, inspirational, and comforting—Todd Greenfield, Former VP Finance, 20th Century Fox Studios

Aura’s book reveals a very personal but intense description of the life in Romania before and after the Romanian Revolution of 1989. This makes it a contribution to find out beyond historical studies, what happened to and with the people there. This book is sure to find its place in memorial literature of the world. —Beatrice Ungar, Editor in chief, Hermannstädter Zeitung

Aura Imbarus is an educator, professional speaker, and the author of the critically acclaimed memoir, a Pulitzer Prize entry and Amazon best-seller, Out of the Transylvania Night.