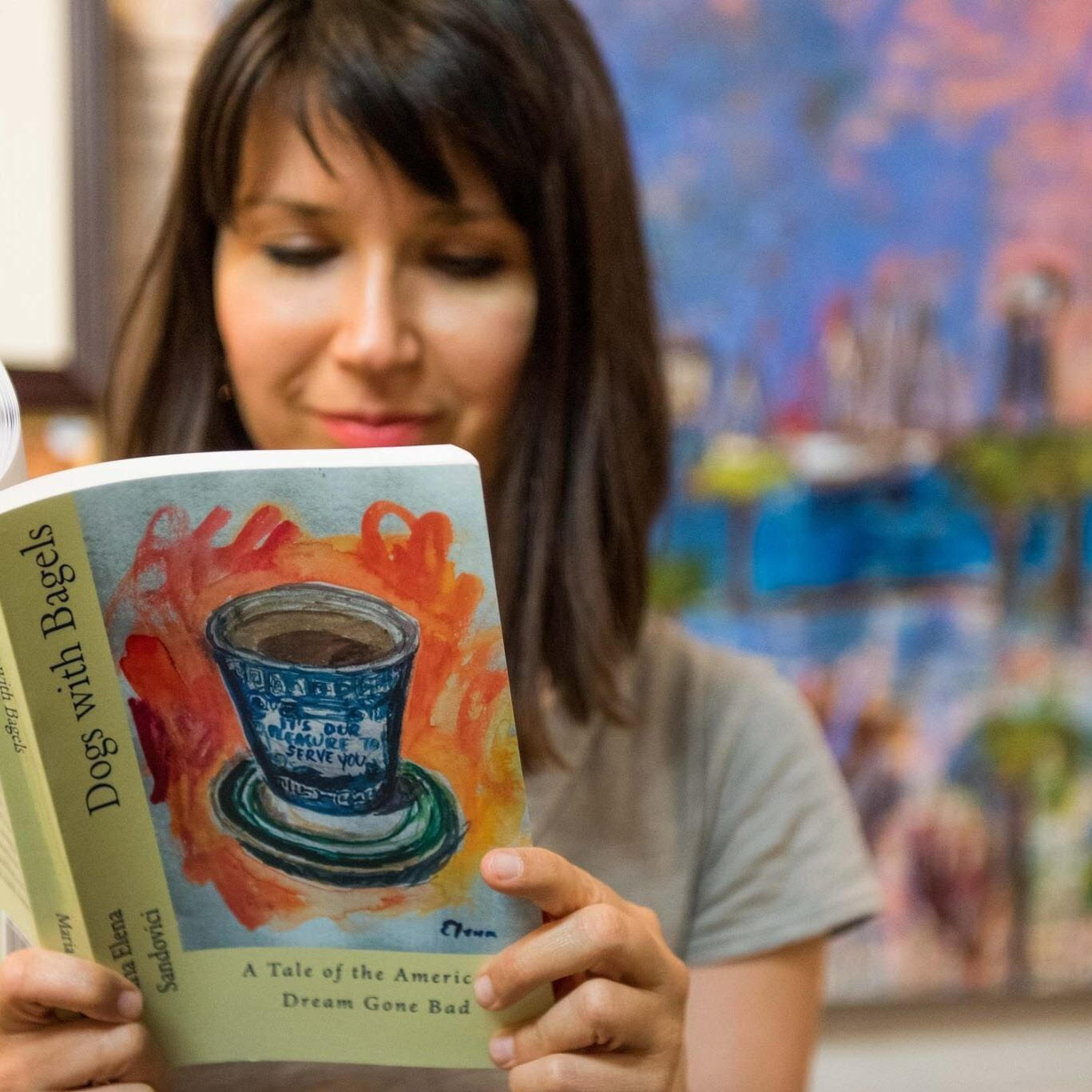 Dogs with Bagels, and The Adventures of Miss Vulpe by Elena Sandovici

Maria Elena Sandovici was born in Bucharest, a city she adores, as it perfectly matches her own penchant for both romance and neurosis, and went in search of international adventures at a very young age. Sandovici obtained her B.A. in Political Science from Arcadia University in Philadelphia in 1999, certificates in Peace Studies from the European Peace University in Stadtschlaining, Austria (1998) and Castellon, Spain (1999), and finally an M.A. and Ph.D. in Political Science from Binghamton University, in Binghamton, New York in 2002 and 2005 respectively. She is an Associate Professor of Political Science at Lamar University in Beaumont, Texas where she obtained tenure in 2011. Her research on individual-level political behavior has been published in reputable international journals, such as Comparative Sociology, Comparative Political Studies, and International Journal on Minority and Group Rights. She is the recipient of awards such as the Southern Political Science Best Paper Award (2011), as well as various research grants. Her career as an international scholar has led to research stays at the Norwegian University of Science and Technology in Trondheim, Norway, the Juan March Institute in Madrid, Spain, Universitat Pompeu Fabra in Barcelona, and Vrije Universiteit Amsterdam, Netherlands. She has recently decided to leave academia in December of 2018 in order to pursue a career as a full-time artist and writer and open her own gallery in Houston, Texas, the vibrant multicultural city that’s been her home for the past three years. She is currently an Escapist Artist in John Ross Palmer’s Mentorship Program, Class of 2018.

In addition to her scholarly work, Sandovici is a fiction author and has published four novels  (Dogs with Bagels, 2013; Stray Dogs and Lonely Beaches, 2015;  Lost Path to Solitude, 2016; The Adventures of Miss Vulpe, 2017), and a volume of poetry in the voice of her dog (Stop and Smell the Garbage – Poems by the Biggest Dog in the Universe, 2017). Her books have been featured on the Lone Star Literary Blog Tour, and are among local favorites at the Galveston Bookshop. She has held book signings in Houston, Galveston, and Austin, and her second novel, Stray Dogs and Lonely Beaches has been featured in the Houston Chronicle.

The themes mosty commonly found in her books are those of travel and displacement, of searching for one’s identity through relocation and transformation. Sandovici also addresses these themes in her own life on her daily blog Have Watercolors Will Travel, where she posts a new painting each day, along with an update on her own journey and adventures. You can also find her on Facebook, Twitter (@SandoviciME), and Instagram (@mariasando).